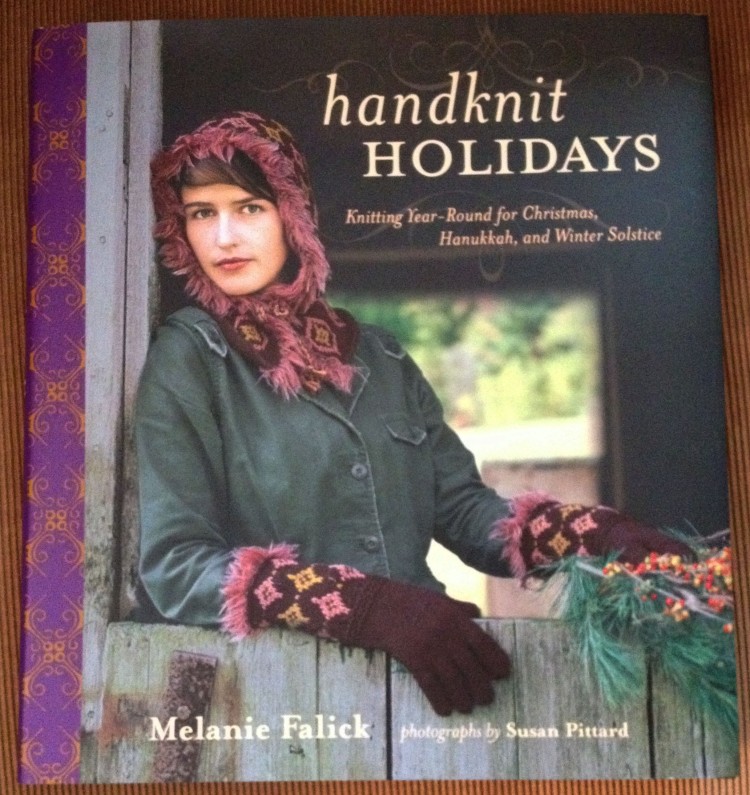 Another Melanie Falick book – Handknit Holidays seemed like a good one to review. I thought for sure that this one would be an easy in and out book and I could pat myself on the back having removed another book from the sagging bookshelf. The first section featuring all sorts of holiday designs made me think that this was just another book of patterns that don’t interest me. Delving further into the book, I changed my mind. I might later change my mind but for the first pass this book is staying.

Looking on Amazon, looks like this book published in 2005 is available in a digital format.

What’s good? The photos are “Melanie worthy”, good clear layout of patterns plus a good section at the end on Special Techniques and Abbreviations (although no illustrations). Betty Christiansen who’s work I’ve admired worked on this book with Melanie. 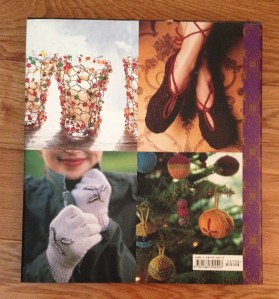 What follows are a number of patterns that made me think twice about “deep sixing” this volume.

Community Afghan – the intro suggest this as a project for a group. Squares are all knit in garter stitch. 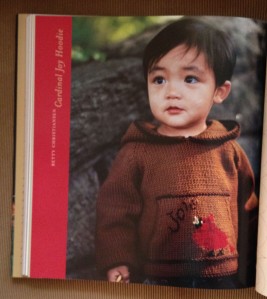 Cardinal Joy Hoodie – Given in 3 chest sizes, it’s pretty hard to figure out the actual size child this would fit. Hoodies are perfect for kids of all ages and this one (I’d do without the pocket design). 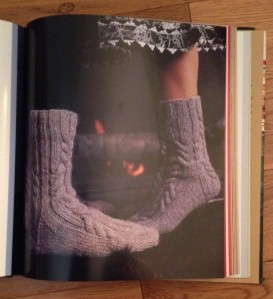 Log Cabin Socks – This look like they’d be really fun to knit. I’m not sure if they’d be practical to wear with shoes, but would be great under boots.

Snowy Triangle Scarf – The modular construction of this scarf (and hat) looks like a really knitterly project. Nice way to try out the technique without making a really big project. 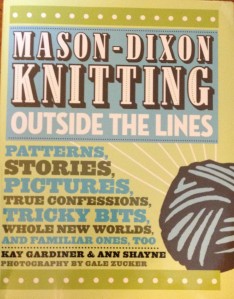 I thought this might be a multiple part epic, but once I got past the “The Daily Sweater” I realized that most of the rest of the book wasn’t  a “must-have” for me.

My final decision: Thumbs Down. It’s going in my sell, give away or donate pile. Yay – one down and out!

I will amend that slightly. I do like the next knitted cabled sock project. It’s included as a teaching cable project, but seems like a good project for anyone. Might copy this pattern before I move it out of my library.

From there it gets a little dicey. Here’s the next project. It’s called “The Mystery Sweater” and features some timeless quotes from Martin Luther King Jr and Gandhi, but knit in a darkish purple the quotes are really hard to read. The most disappointing part is that the lettering is not knit-in, but rather chain stitched on after the sweater is complete. I didn’t think that the instructions on doing the lettering would be easy-to-follow for someone who hasn’t done much or any embroidery. Also, the romantic peplum seems a bit overdone. I don’t know too many people who could carry this off in ordinary life. 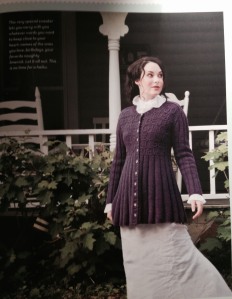 The next whole section is on Fair Isle. The featured project is a throw with a Victorian wallpaper look. Too much work for the result. The info on Fair Isle plus illustrations are good, but I’m not going to use this chapter. I do like the rug made in Brown Sheep’s Lamb’s Pride Bulky. It’s done in a circular manner and then steeked. No – not for me! 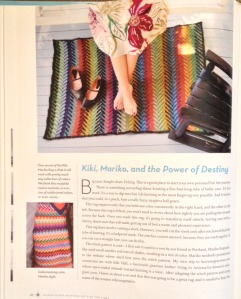 I’m going to skip the whole “Covering The Small Human” chapter. The designs were really not wearable by any child I know, except the Jane Austen Shrug. This is based on the same idea as The Daily Sweater so this must be why I like it. Do these women really have children?? Wow!

The last chapter with kitchen items is kind of interesting. This could be a money-saving duster for those who whip through “Swifters”. It’s done in a matte cotton so it’s perfectly washable. Would I make one – probably not. 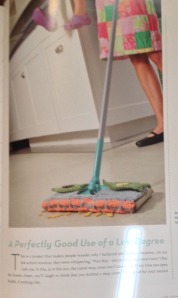