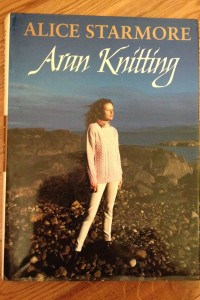 After reading the new intro for this book, I realized that I have have the original 1997 Aran Knitting book. That’s what comes from having way too many knitting/crochet books.

Alice’s comments in the new preface in the paragraph titled “The Forces of Obfuscation” were unsettling. Basically she believes that what people know as “Aran Knitting” is somewhat of a made-up, mystical history. Basically, she strongly  states that the word “Aran” has been mis-used as a type of cable patterning used mainly in sweaters that have nothing to do with the Aran Isles off of Ireland.  That’s kind of a short, cliff notes version of what she actually said.

I somehow made it into her book in a round-about way. When I was working for Knitter’s Magazine, we created a contest that ultimately turned into a booklet of squares made up of various patterns that we loosely called “Aran Knitting”. It was titled  The Great American Aran Afghan. While we had no intention of saying these patterns or squares were authentic, historical designs from a country not anywhere near America.  Somehow Alice thought they “purports to be a showcase of Aran patterning”. Wow! Who knew! One of the squares used motifs picked up from Alice’s book. The square was created to honor a sister who had died of breast cancer. I’m sure the square’s designer didn’t realize that it was not correct to take someone else’s patterns to create a square for a published booklet.

After reading the new preface, I had to ponder before going on. I’m sorry for my part in Alice’s distress. Next week I’ll read more about the historical background and share…. 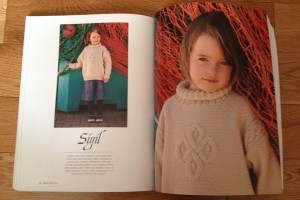 Alice’s Original Patterns from her book. 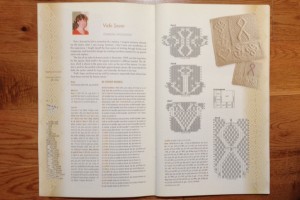 The square that used designs created by Alice Starmore.